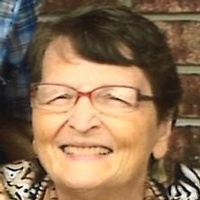 Shirley Thompson was born on Aug. 10, 1944 in McAlester to Jessie and Margarette (Moore/Cooley) Prater. She grew up here and graduated from McAlester High School, then married Don Thompson on July 9, 1964. Shirley’s greatest interest was her family. She was the consummate “Mom” and “Grandma”, not only to her own, but to their friends, as well. She is survived by her husband, Don Thompson; her son and daughter-in-law, Jeff and Lawanna Thompson; 4 grandchildren, Blake Allen Thompson, Maranda Bailey Martinez, Breana Marie Thompson and Hannah Breann Whitlock; 3 great grandchildren, Meriella Grace Martinez, Wyatt Allen Martinez and Paxtyn Emmarie Austin, (with 2 more expected soon); a brother and sister-in-law, Jimmy and Pat Prater, and a sister and brother-in-law, Carolyn and Ed DeBrosky. She was preceded in death by her parents, a great granddaughter, Sophia Ann Martinez; a niece, Gina Miller; and a sister-in-law, Dorothy Adams.