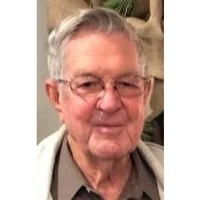 The family will welcome friends at Brumley-Mills Funeral Home on Monday from 5:30 to 7:30. Mass will be Tuesday, May 28, at 10:00 a.m. at St. Joseph’s Catholic Church in Krebs, with Father Kingsley George-Obilonu officiating. Burial will follow at Mt. Calvary Cemetery in McAlester. Members of the Knights of Columbus will serve as pallbearers; honorary pallbearers will be Bob Basolo, Joe Massaro, Tony Drizzness, Toy Wingo and Eddie Smith, and Bob Woolman.

Bill Derichsweiler was born on July 26, 1934 in McAlester to Matthew M. and Marie (Johnson) Derichsweiler. He grew up here and has lived here all his life, graduating from St. John’s Catholic School. He married Valeria Joy White on Dec. 29, 1954 in McAlester. Bill also served in the U. S. Navy Reserves for 25 years. Bill was well known as the State Farm Insurance Agent in McAlester for many years, an agency which is still active under the guidance of Bill’s son, Mark. Bill enjoyed going hunting and fishing, but his volunteer community work was closest to his heart. Bill was a member of St. Joseph’s Catholic Church in Krebs and a long-time member of the Knights of Columbus. He spent many hours supporting the advancement of the Knights of Columbus, the McAlester Boys and Girls Club (past president), the Good Samaritan Outreach Men’s Shelter, the Hope House Women’s Shelter, and the E-Angel program. The family asks, in lieu of flowers, memorial donations be made to any of those organizations for Bill’s legacy to continue.