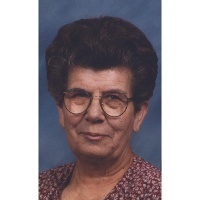 Millie Preston was born on March 17, 1928 on the family farm north of Canadian, to Fred and Ora (Christy) Benson. In 1946 the family moved to a farm west of Indianola. Millie married Paul Preston on Nov. 21, 1950 and they soon made their home in McAlester. Millie worked as a cook for the McAlester Public Schools for 23 years until her retirement. But most of all, Millie loved being a wife, mother and grandmother and loved working in her yard and garden. She was a big OU football fan and also watched most other OU sports on TV.