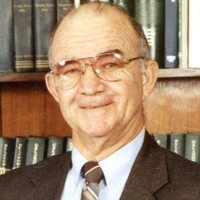 A celebration of life service will be Monday, 10:00 a.m., September 16, 2019, at Calvary Baptist Church in Sand Springs with Pastor Robert Haling officiating. Mobile will be laid to rest at Woodland Memorial Park Cemetery in Sand Springs. Arrangements have been entrusted to the care of Mobley-Groesbeck Funeral Service of Sand Springs.

Mobile was born on May 15, 1931, in Mobile, Alabama to Fred and Helen (Trawick) Robinson. He attended school in Mobile and the family later moved to Sand Springs. Mobile served in the United States Army until he was honorably discharged. He married Margaret Branscum on December 5, 1951, in Sand Springs and worked for the Sand Springs Postal Service as a letter carrier until going to work for the Tulsa County Sheriff’s Office as a deputy. Mobile had the first canine dog “Apache” for the Sherriff’s office. He worked for over thirty-three years with the department and retired as Captain. Mobile started his own private processor business that he operated for the next seventeen years. His wife Margaret passed away on January 11, 2013. Mobile was a member of the Calvary Baptist Church since 1951, where he had served as a deacon for many years.

Online condolences may be left for the family at www.mogro.co