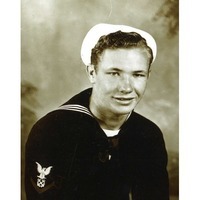 Dale was born on March 3, 1925 in Kiowa, Oklahoma to James Lester and Helen (Brooks) Mackey.  He grew up and lived most of his life in Kiowa.  He attended Kiowa School and was drafted into the U.S. Navy in July of 1943.  He was stationed on a troop transport ship the U.S. President Monroe.  He served 2 years, 8 months and 9 days and was discharged on March 22, 1946, receiving 5 battle stars.  He returned to Kiowa where he met Dorothy Ponder, they were married on September 28, 1946 in McAlester and they were married for over 72 years.  He worked at the McAlester Army Ammunition Plant and retired with 34 years with the civil service.  He loved fishing, hunting, gardening and growing flowers.