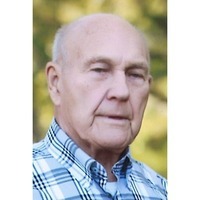 Leroy Henley, 89, of McAlester, died Friday, Oct. 11, in McAlester.  The family will welcome friends at Brumley-Mills Funeral Home on Monday from 6:00 to 8:00 p.m.  Funeral, services will be Tuesday, Oct. 15, at 10:00 a.m. at Brumley-Mills Funeral Home Chapel.  Burial will follow at Oak Hill Cemetery.  Pallbearers will be Josh Soblaskey, Marty Soblaskey, Kevin Connor, Jason Semeski, Billy Wheeler and Tyler Soblaskey.  Honorary pallbearers are members of North A Street Church of Christ.  The family requests, in lieu of flowers, memorial donations be made to the Susan G. Komen Breast Cancer Foundation.  Their website can be found on-line.

Leroy Henley was born on April 13, 1930 in Indianola to John Henley and Beatrice (Cathey) Henley-Turney.  He grew up there and graduated from Indianola High School.  He joined the U. S. Air Force and served during the Korean War and for a total of 14 years.  Upon his honorable discharge he joined the Army Reserves and served for another 16 years before retiring.  Leroy married Joyce Dean Thompson on March 27, 1953 and, after his military service, they returned to Pittsburg County, eventually making McAlester their home.  Leroy worked as a plumber and in 1970 started his own business, Leroy Henley Plumbing, and worked at that until he retired.  Leroy was a long-time member of the North A Street Church of Christ.  In his spare time he enjoyed hunting, fishing, gardening and spending time with his family.  He especially liked watching all his grandchildren and great grandchildren in their activities.  He rarely missed any events they were involved in.

The family would like to give special thanks to Ideal Home Health Care, Samantha Stonebruner, Southeast Hospice, and Walnut Grove Living Center, for the special care they provided.