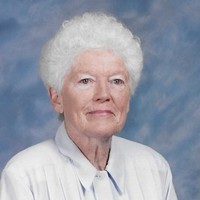 Helen Josephine Hoagland left this life on December 20, 2019.  Helen was born March 29, 1927 in Muskogee, OK to J. Joseph and Laura (Dangerfield) McAulay.  She was the youngest of nine children. Helen’s early years were spent in Tulsa. She attended school at Holy Family and Monte Casino. Ramie Hoagland, the "boy next door", was her great love. They married on August 28, 1948.  She and Ramie embarked on a life together that took them from Tulsa to Kankakee, IL, Lafayette, IN, Gallatin, TN, Bettendorf, IA and happily, back to Broken Arrow in 1973.  During those early years they were blessed with four children.

Helen will be long remembered and forever cherished as a devoted wife, loving mother, grandmother, great-grandmother, aunt and faithful friend.  To know Helen was to know she was never short on conversation.  She was generous in her capacity to engage people by offering a smile and a few friendly words.  Being kind was simply who she was.

At her core Helen treasured her family. Although Ramie was taken from her too soon, she honored his memory by keeping her family close.  She was proud of her children and delighted in family occasions, especially with her grandchildren and great-grandchildren. In recent years she took great pleasure enjoying lunches with her nieces.  Always, she found joy in life's simple pleasures.

Helen relished her role as mother and homemaker. However, over the years she enjoyed playing golf and making friends at Indian Springs in Broken Arrow. She also had fond memories of her years as a teacher’s aide at Holland Hall.

The family wishes to thank their extended family, friends and all who supported Helen during her final months, which she referred to in her personal journal as her “walk with cancer”. A special thank you to the staffs at Montereau Health Center and St. Francis Hospice for their love and care of Helen in her final months.  In lieu of flowers, memorials can be made to Saint Francis Hospice or the American Cancer Society.