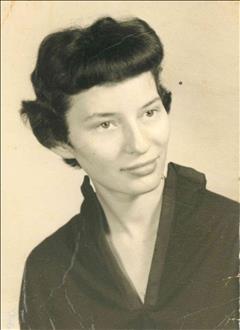 Born May 31, 1937 in Madill, Oklahoma, Betty June Adams was the second daughter of Haskel Leon and Madge Evelyn (DeFer) Adams. June would grow up in her birth community where she became a high school graduate. Following high school, she would move to Oklahoma City where she was briefly employed by Bama Pie Company.

It was while living in Oklahoma City that June first met Walter Ray Atkins. It was pretty immediate that Walter began chasing June. He recounts that she was a hard one to catch! His persistence would pay off as he eventually caught her and he never let go. The couple married on May 22, 1960. They would make their home first in Colorado, later moving to Missouri, and eventually Oklahoma where they settled in the Mounds community.

Through the years, June served as a homemaker and always took great care of her family. Known to be a homebody, she loved watching her soap operas and almost always had a cup of coffee nearby.

Described as: beautiful, strong, and tough, June was known to say what was on her mind. There is no doubt, however, that she deeply loved her family.